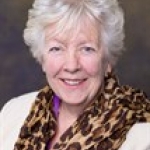 It has a population of 8,087 (as at the 2011 Census) and one of its three City Councillors is Conservative:

The Member of Parliament is John Whittingdale.