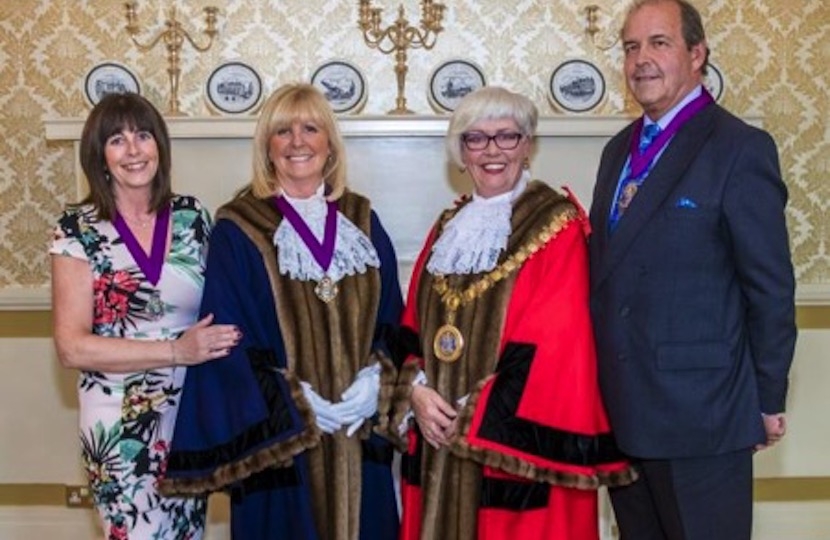 At an official ceremony during a full council meeting yesterday (Wednesday 16 May), Councillor Yvonne Spence and her husband John began their term as mayor and mayor’s consort of Chelmsford for 2018 – 2019.

Alongside her work as a councillor, she has been committed to fundraising within the community.

Yvonne is probably best known to the residents of Chelmsford as a teacher at the Cathedral Primary School, Chelmsford, from 1986-2001; as the organiser of social and fundraising events at Chelmsford Cathedral over three decades; and as the long-standing supporter of charities such as The J’s Hospice and CHESS Homeless.

She has lived in Chelmsford since 1980 and has previously been Chairman of Chelmsford Ladies’ Circle and Chelmsford County Tangent, and a governor at the Cathedral School and the former St Peter’s College. She is married to John and has three married children and five grandchildren.

Yvonne has served on Chelmsford City Council representing the Lawns Ward from 2003-7, and Marconi Ward since 2015. She serves on the Licensing Committee and Overview & Scrutiny Committee. As a City Councillor, Yvonne loves it when she can solve problems for her residents.

Yvonne is also on Springfield Parish Council, Springfield United Charities and the Beaulieu Community Trust. She has been both chairman and president of Chelmsford Constituency Conservative Association.

During the ceremony, Councillor Christine Garrett was announced as Deputy Mayor of Chelmsford City Council.

Christine will be supported by her sister and deputy mayor’s Escort, Sheila Wilkinson.

Christine was born in Collier Row in the London Borough of Havering, but has lived in Chelmsford for over 36 years, mainly in the Springfield area. She has close family ties, with eight nieces keeping her busy.

She worked for ten years at Rainsford High School, which was later renamed St Peter’s College, and was very sad to see the school close. She was also previously a Governor at Perryfield’s School.

Proud to have been elected as a City Councillor for the Lawns Ward in 2011, Christine enjoys many aspects of the role, especially meeting residents and helping with issues when asked. She sits on the City Council’s Audit Committee and was Vice Chair of the Licensing Committee, alongside being involved as an observer at the Chelmsford Voluntary Service and attending their board meetings.

Christine is also a Springfield Parish Councillor, with the role of Vice Chair of the Parish Council. She is involved with the Events and Projects, Finance, Premises and Personnel Committees, all of which enable her to keep in touch with local issues in Springfield.

The Mayor’s charities will be Kids Inspire and a Dementia Project at Broomfield Hospital.

Kids Inspire supports disadvantaged youths across Essex, who are at an educational, social and/or economic disadvantage resulting from trauma or emerging mental health issues.